Max was hit by a car last night 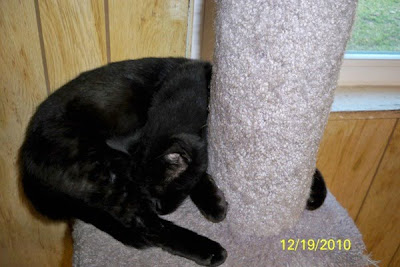 Last year a local stray black kitten adopted our family. We left our window open to let our boys have free rein on a nice fall day. My daughter’s boyfriend asked a strange question about one of the kitties eating vs. one of the kitties at his feet. I named the kitties and then he asked the strangest question, “then who is this over here?,” about another cat at his feet. So I looked and realized that we had a stranger in the house. Within a week we had adopted him, named him Max and took him to the vet for a proper visit (shots and neuter).

Fast forward to last night: My daughter and I had gone to the local book store for coffee and a little hang-out time. We were there maybe 15 minutes when I received a phone call from my husband that Max was hurt. He told me that my son found him dragging himself across the street toward our house. We got home as quickly as possible and I called the vet emergency line. It appeared that Max had his hindquarters paralyzed. There are no external bleeding wounds. Max never once showed any sign of pain or discomfort despite the fact that we had to pick him up to take him to the vet. We supported him as well as we could to reduce further damage as we didn’t know how seriously bad off he was. We got Max to the vet. While there, Max did move his legs and tail but….

Max has little to no feeling in both legs, and at least one broken leg. X-rays revealed that his right leg is dislocated from the pelvis, his pelvis is broken and the vertebra above his pelvis is broken. There is also bruising on his abdomen around the hip area. Doc is worried that he does have internal injuries but since his gums are still pink, at least he appears to not have catastrophic internal bleeding. Doc said he won’t know until tomorrow.

Doc gave him steroids and an antibiotic last night. He can’t even attempt to get his hip back into place due to the pelvis break and swelling. He says to reseat the ball he needs to put pressure on the pelvis. This is a seriously not-good thing. Now, even though his back is broken, doc says that some animals recover from this kind of break (broken but the spinal cord is not severed) especially since Max can still move his legs and tail but his hip joint will never be the same. Doc says the tendon that holds the hip joint together is snapped so there’s a chance he will have to amputate the leg. His concerns now are whether he gets any feeling back in his other leg and the abdominal bruising. If he doesn’t get feeling back, his quality of life will be minimal; the bruising may indicate more severe internal injuries. I am supposed to wait until noon before I call to find out how Max is faring. He said he needed 24 hours to see if Max has a chance and since 24 hours would be 7:30pm tonight, he said I can call at noon. As we were leaving the vet’s office last night, he said he would be administering pain meds. The thing is, last night Max showed no pain. Discomfort, yes. Pain, no. Not good.

I can’t cry right now. I almost broke down but I didn’t cry last night. My daughter needed me to be strong because she was crying. I’m numb. I have more thoughts but they feel callous under the circumstances. My pragmatism is keeping me from losing my mind while I wait to see what the doc says.

My husband and I talked last night. We have already decided that if Max doesn’t make it we will be adopting another kitten. Our reason for this is that Buddha, Max’s age, will miss his playmate. Old Man “Racoon” doesn’t like any of the other cats and could care less. He still hates that his domain was invaded by all the other furkind. Junior, whose real name is Midnight, could care less. He thinks the twins (Buddha and Max act like they are littermates) are annoying. But Buddha, poor Buddha, would not have anyone to play with. I know he will be missing Max if that is what it comes down to but a kitten would definitely go a long way toward helping him (and us.)

Please keep Max in your thoughts today. Waiting to find out what his chances are is a difficult thing.

Writing this is giving me a feeling of a vacuum in my gut. I feel like throwing up.

PS: Doc says the damage could only have happened by Max being hit by a car. We live in a quiet neighborhood. This means someone was speeding through the neighborhood. I’d like to throttle the ass who did this!

PPS: Doc says the fact that he was found so quickly does improve his chances.

Addendum: The breaks are the points where his hips join his spine. It turns out that his spine is not broken but his pelvis is broken in several places as well as the dislocated hip. We have him home now and he will go back in two weeks for the ball-removal once all the swelling goes down. He's home primarily so we can monitor him over the weekend. After that it's just a matter of keeping him from trying to run around. 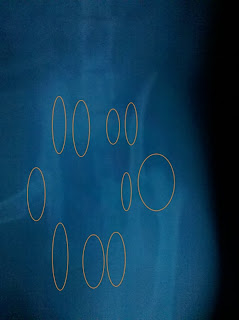 *Window Treatments - Started 2/21/2011. Washed fabric. Windows re-measured and notes made. Plans will be finalized before first cut is made. Resources are limited.